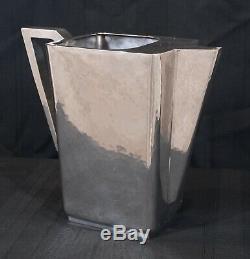 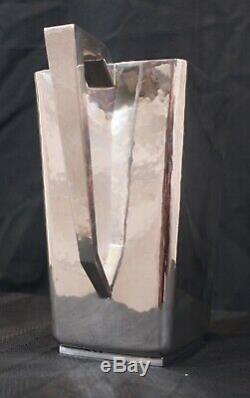 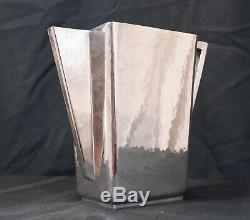 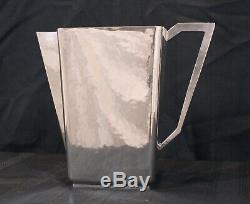 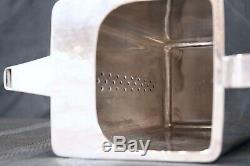 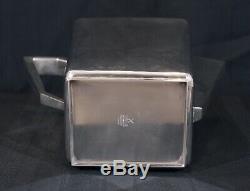 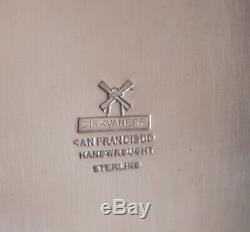 MUSEUM QUALITY William Van Erp Sterling Silver Arts and Crafts Modernist Hand Wrought Hammered Water Pitcher Sterling Silver Weight 44 oz. The mark shown in the picture places this piece as the work of William Van Erp, Dirk Van Erp's son, made from the 1929 until his death in 1977. While we have found similar pieces that William made in copper, this is the only full-size pitcher in sterling silver that we have been able to identify. From a smoke free home.

This was the time when his father, Dirk, would take home brass shell casings from the shipyard and make them into hammered art metal vases. William grew up with his father constantly working, hammering out these vases and making other useful things out of metal.

By 1916 at the age of 15, he was working as a full time metalsmith. In 1917, the two children, Agatha, age 23, and William, age 16, ran the van Erp Shop, while Dirk went to work in the shipyards. William and Agatha continued to work in their fathers shop throughout the brisk business of the 1920s.

However, in 1925 William spent some time traveling as a crew member on board the S. Pierce sailing throughout the Pacific working as a Third Electrician alongside his friend Albert J Hooy who was the ships Chief Radio Operator. Albert J Hooy would go on to marry Williams sister, Agatha in 1929. William had wanted to join the Navy during WWI, but he had been too young. On April 10, 1928, William van Erp married Josephine Prehn at St. Peters Episcopal Church in San Francisco. Their son, Dirk was born the following year. The van Erp family has a tradition of alternating between the names Dirk and William with each successive generation. In 1929, Williams father retired and by the early 1930s Dirk and his wife Mary were spending much of their time at their summer home across the Bay in Fairfax, California. In July 1933, when Dirk had just passed away, the San Francisco Examiner reported, The son of the couple, William van Erp, 1104 Sutter Street, came over to be with his mother. Im not going to live without Dirk she told him. His mother died four hours after her husband. Van Erp left his estate to his wife and she to him. In the event of the death of each, as it occurred, the copper shop at 1104 Sutter Street was left by both to their son, William van Erp. " The house on Vallejo Street was "bequeathed to a daughter, Mrs Agatha Van Erp Hooy.

After the sudden death of both his parents, William was in shock. This was 1933 during the heart of the Great Depression, and now the responsibility of continuing the work of the studio rested completely in his hands. Meanwhile, tastes had been changing. The dark patinated Arts & Crafts forms were no longer as popular and Art Deco was now the style of the day. William learned to change with the times.

Besides pieces of copper, he began to also offer pieces made of brass, silver plate and sterling silver. Brass varies in color and as Van Erp says, Its a hell of a job to match it.

We made a desk set after the war and the people came back for an additional piece, a calendar set. We were just lucky to find the right matching material. Copper can be darkened through the use of acids while bronze obtains its patina through the use of copper nitrate and salt. Years ago everything was colored or had a fine patina. Van Erp says, But today people want shiny things to go with the new houses. By 1937, William had moved the studio downtown to 512 Sutter Street near Powell Street, adjacent to the Cable Cars. During WWII, William closed the shop and sent out an announcement prior to closing. To All of Our Customers: It is with intense regret that we must tell you that we are closing our doors for the duration. We feel it is everyones duty and privilege, to contribute everything in their power to win this war in the shortest possible time; therefore, we are closing our shop and going into defense work. As soon as the war is over and everything is once again as it should be, we plan to re-open. In the meantime, if you happen to be in the vicinity of Sutter and Powell Streets during the next month, perhaps you may find time to step in for a few moments to allow us to express our appreciation and thanks to you for having given us the opportunity to serve you.

With many thanks for past favors, and until we meet again, we remain, Most Sincerely, Dirk van Erp. Williams studio still carried his fathers name and many people called him Dirk.

During WWII, William was able to fulfill his boyhood dream and joined the Navy as a shipboard metalsmith. He was stationed in the Pacific. In a letter dated June 15, 1943, his wife Josephine writes.

Shortly after the war, William moved the Dirk van Erp Studio to the Fishermans Wharf area at 619 Beach Street. Business was getting back to normal, and now with all of the damage in Europe, many churches were being rebuilt and needed special order ecclesiastical pieces. The Dirk van Erp Studio under the direction of his son achieved international reputation for its fine craftsmanship of ecclesiastical wares. It became a huge part of the studios business. William operates the business with the aid of Charles Anderson, who had learned the craft from Williams father and has been with them for 33 years except for WWII when both Van Erp and Anderson closed shop to go with the Navy.

We still have a great time potting around together, Van Erp said, Its my wife, Josephine who holds the business together. Our work is essentially custom made, Van Erp explained, but when we have time on our hands, we make things to fill up our stock. At present Van Erp and Anderson are working on some brass vases for the University of Santa Clara Mission. Much of their work consists of chalices, candelabra and other alter pieces for churches and other denominations.

This is a fun business, he said, because youll never get rich at it. Rich or not, hes enjoying the life he has chosen. (Italics above from San Francisco Chronicle, April 22, 1963). In 1962 William van Erp moved the shop to 773 14th Street where William, Charles Anderson and Larry Roberts worked into the mid 1970s.

Charles Anderson died in 1975, and two years later, William van Erp died on May 2, 1977. His obituary ran in the San Francisco Examiner the following day. William van Erp, 76, member of a long line of artisans who left a lifetime of works in silver, copper and bronze in California homes, churches and museums, died yesterday at St. He was the son of master metal worker Dirk van Erp, who came to California from Holland in 1886. To ply the family trade, and the fathers name, remained on the Van Erp shop at 773 14th Street, along with a weather (sic) bronze windmill, long after the elders death in 1933.

The family and its craft go back generations in the town of Leewarden in Freisland, Holland. Don't miss this fabulous Sterling Silver Water Pitcher by the famous San Francisco Dirk Van Erp metalsmith shop. I have hundreds of unusual and discounted items. The item "RARE WILLIAM VAN ERP STERLING SILVER HAMMERED ARTS & CRAFT WATER PITCHER 44 OZ" is in sale since Friday, March 6, 2020.